As of January 2017, Rotterdam Offshore Group has started to upgrade their facilities in the Waalhaven, Rotterdam.

ROG has acquired the neighbouring land and buildings to their existing premises allowing the significant expansion of their quayside, storage as well as office capabilities.

ROG will now be able to accommodate vessels up to 320 m in length where previously the maximum vessel length was 200 m. To support the increase in activity, the storage facility will increase from 14000 m2 to 21700 m2

In March 2017, the project to demolish the existing company buildings will begin and the construction of the new state of the art office and workshop will start. The project has been planned to ensure that all ROG services remain fully operational during the construction period and all staff will move to temporary offices within the newly acquired premises until project completion planned for the end of 2017.

The expansion of ROG all-round service capabilities will further enhance its reputation as one of the leading mob/de-mob and ship repair companies in the region. ROG facilities are in a central, easy accessible and strategic location in the main port of Rotterdam, and are a recognized facility as required by the International Ship and Port Facility Security (ISPS) Code. Efficient in and out “open sea” access is guaranteed due to ROG facilities being located to the west of all bridges that restrict other areas of the port.

The Port of Rotterdam is the largest port in Europe with an estimated cargo tonnage throughput of 465 million per annum and a port area of 12,500 ha including 6,000 ha of business sites. The total length of the port area is more than 40 km. and approximately 30,000 seagoing vessels and 110,000 inland vessels visit the Port of Rotterdam every year.

Martin van Leest – Managing Director ROG added, “The expansion of our facilities is paramount to the future success of the overall business. We have been at 90% berth occupancy and our current storage capacity is running at close to 100% utilisation, which is fantastic in the current economic climate. This initial expansion will mean we can service not just more, but larger vessels and this will be followed by works to develop our quayside capabilities and inclusion of a floating dock.

“We continue to expand our complimentary services such as ROG Green technologies which supports the Ballast Water Treatment installation demand, and in addition, demand for our Offshore Wind installation and transport vessel mob/demob project expertise continues to grow which is testament to our problem solving approach.” 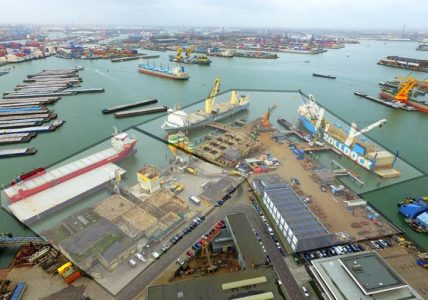