ScottishPower Renewables (SPR) has awarded Van Oord and Seajacks a contract to transport and install the jacket foundations for the 714MW East Anglia 1 offshore wind farm off the UK east coast.

Seajacks jack-up ‘Scylla’ will be the main installation vessel on the job, which will support 140 current positions and allow the company to create up to 75 new roles.

‘Scylla’, which has 105-metre legs and is capable of working in water depths of up to 65 metres, will be on the project for at least six months starting in April 2018.

SPR said Van Oord crane vessel ‘Svanen’ would be on the job but later said this was an error in the contract announcement.

London-listed fabricator Lamprell has a contract to supply 60 jackets, of which 24 will be outsourced to Belfast yard Harland and Wolff.

Spanish company Navantia will supply the remaining 42 jackets for the project, which will consist of 102 7MW Siemens turbines.

First turbines are set to be installed in the summer of 2019. 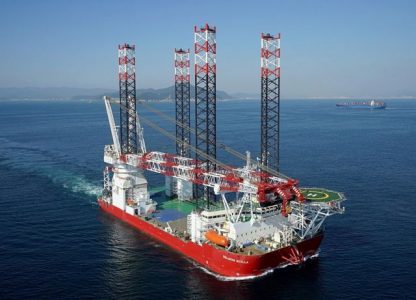