A harbour revision order by the Scottish Government was sanctioned by the harbour’s board earlier this week.

It’s estimated the development will boost the economy by £1 billion a year by 2035, and create 7,000 new jobs.

Residents’ group Bay of Nigg, Torry: Our Concerns started a petition last year to protest against the plans to build on land at the bay.

Work is expected to begin in the new year, and be completed in 2020.

Colin Parker, chief executive of Aberdeen Harbour Board, said: “We are delighted that, after six years of detailed planning and extensive consultation with our many stakeholders and the regulatory authorities, we are now in a position to approve commencement of construction.

“Following a detailed engagement process, Aberdeen Harbour Board, in partnership with Dragados UK, a main contractor, will develop facilities over the next three years that will represent a step change in the marine support capabilities in Scotland. These will transform the port’s ability to accommodate the trend for larger vessels we are witnessing across a whole range of industries.

“The expansion will afford existing customers the opportunity to diversify and expand their interests, whilst attracting new customers and markets to the port, including up-scaled decommissioning activity, a more significant share of the available cruise vessel fleet and larger more cost-effective commercial vessels.”

“Its longevity can be attributed to its ability to adapt to changing trading requirements and being forward-thinking in delivering new and improved facilities to support its customers, while at the same time attracting new business.

“This major new chapter in the port’s history continues this approach and underpins the Trust Port ethos of viewing future generations as key stakeholders.

“We believe that the infrastructure developed in Nigg Bay will encourage and support the continued prosperity of the city and region that the harbour serves and make a significant national economic contribution.”

Scottish Government Minister for Transport and the Islands, Humza Yousaf, said: “This is excellent news for Aberdeen and the Scottish maritime industry, as the signing of the construction contract means this nationally significant project can now get underway in earnest.

“The significant investment will bring jobs and business to Aberdeen, supporting the local and national economy. The historic harbour will be transformed to accommodate larger vessels, opening up potential new revenue streams and offering customers world-class marine support facilities. These are exciting times for Aberdeen Harbour. I wish everyone involved in the project every success and I very much look forward to following the expansion as it progresses.” 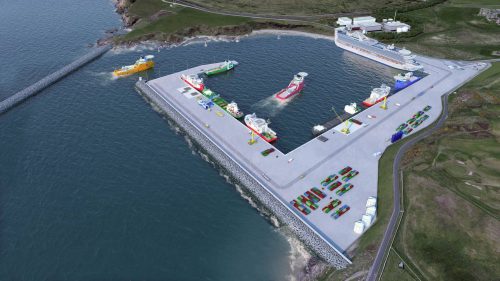