Vattenfall has won the tender to build Danish Kriegers Flak, a 600 MW offshore wind farm in the Baltic Sea.

The winning bid was EUR 49.9 per MWh, which is among the lowest costs in the world for offshore wind power.

“The announcement is an essential milestone for our ambition to increase our production of renewable power. We are already the second largest offshore player globally. The winning bid of EUR 49,9 per MWh proves that Vattenfall is highly competitive and brings down the costs for renewable energy,” says Magnus Hall, CEO Vattenfall.

“This is exciting news. I’m very proud of our people in the Wind organisation who once again delivered a winning bid. Vattenfall has won the three latest offshore wind tenders in Denmark; Horns Rev 3, Danish Near Shore and Kriegers Flak, equivalent to the energy consumption of 55 percent of the Danish households,” says Gunnar Groebler, Head of Vattenfall Wind.

In September, Vattenfall won the tender for the Danish Near Shore project (350 MW). The project is pending the Danish Parliament’s decision to proceed.

“Our winning bid for Kriegers Flak is 58 percent below the original cap of EUR 0.12. For the Danish Near Shore project the bid was also substantially below its cap. Proceeding with these two projects, Vattenfall provides Denmark with a cost efficient contribution to meet the country’s climate targets and customers’ demand for renewable energy,” says Gunnar Groebler.

Kriegers Flak is part of the Danish Parliament’s political agreement from 2012 to become a green and resource efficient economy entirely independent of fossil fuels by 2050. A part of that agreement is to build three major offshore wind farms, Horns Rev 3, Danish Near Shore and Kriegers Flak, where Vattenfall has won the tenders for all three projects.

Winning the bid for Kriegers Flak means that Vattenfall can start to develop the 132 km2area in the Baltic Sea. The area consists of three parts dedicated for wind power development in Germany, Sweden and Denmark. Vattenfall’s winning bid today concerns the Danish part of the Kriegers Flak area. The Swedish part of Kriegers Flak has a building permit that expires in 2018.The German part has not yet been tendered. 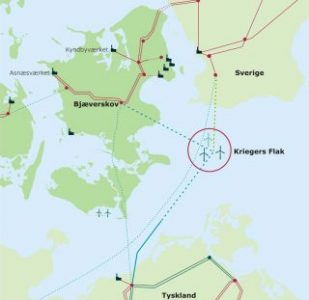