Mammoet successfully coordinates the offload and arrival of the longest module for the Yamal LNG project in Russia this week.

On Tuesday 1 November, Mammoet transported the 5400 ton, 103-meter long module from the heavy transport ship to the dock using 400 axle lines of SPMTs. At the buffer area, the module was jacked down. Once the jacking operation was completed on November 5th the module was positioned onto SPMTs and transported to the plant’s foundation.

The arrival of the module – the 89th module to arrive at the foundation –  marks another milestone in the project for Mammoet, as it is the final component of the first LNG train to arrive, safely and on schedule.

The Yamal LNG project comprises of the construction of three LNG liquefaction trains on the Yamal peninsula, situated on the outer rim of Arctic Siberia. The plant will have an output capacity of 16.5 million metric tons of gas per year.

Within this project, Mammoet is responsible for moving 150 modules and over 1200 smaller items from heavy transport ships in the port of Sabetta to the plant’s foundation. To move all of these components to their destination as swiftly and safely as possible, Mammoet will be using more than 1700 axle lines of SPMT, the largest number of SPMTs ever to be used on a single project anywhere in the world. 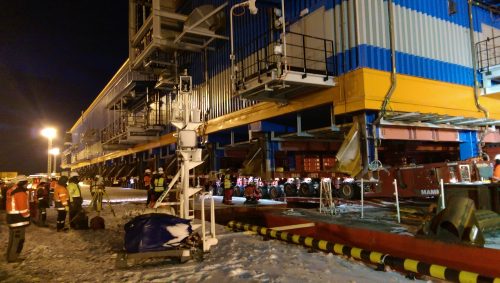 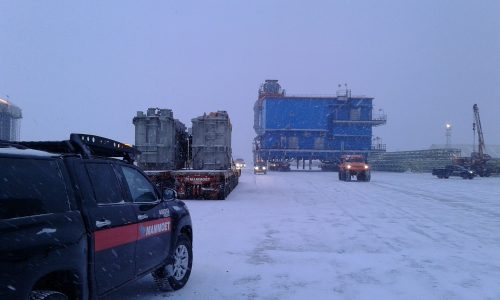