JAK is a leading provider of specialist services to the offshore oil and gas sector in the Gulf, delivering logistical support including oil terminal support services, towage and salvage, together with other integrated offshore solutions. Its current fleet is comprised of vessels including anchor handling tugs, support vessels jack up barges, emergency oil spill response vessel, crew boats, heavy lift crane vessel and flat top barges. These include existing Damen tugs the Jawar Basra, an ASD 3213, with 8000 HP, delivered in 2015, and the Jawar Dubai, a Stan Tug 2909 purchased in 2009.

The 53-metre FCS 5009 is built at Damen Shipyards Antalya in Turkey and to be named the Jawar Abu Dhabi, she is due for delivery in early 2017. The flagship of Damen’s Fast Crew Supplier range, the FCS 5009 has a top speed of 25 knots and can carry up to 80 passengers. 240m² of deck space is available for equipment and other cargo.

The twin ASD Tugs 3213 are to be named the Jawar Faw and Jawar Um Qasr respectively and are being constructed at Damen Shipyards Song Cam in Vietnam. A respected and highly capable design, the ASD 3213 is 32 metres in length, has 8000 HP and with 85 tonnes of bollard pull it is dedicated to handle VLCC tankers at offshore terminals. Both ASD 3213 are under construction and ready to be delivered after commissioning. 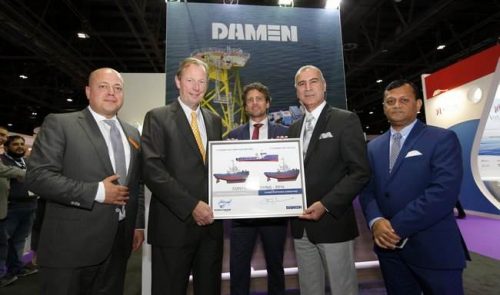