Keppel Shipyard is on track to deliver one of the world’s largest Floating Production Storage and Offloading vessels (FPSO) to Bumi Armada Berhad (Bumi Armada) for operations in offshore Angola.

The naming ceremony of the FPSO, Armada Olombendo, was held at Keppel Shipyard earlier this month.

Keppel Shipyard converted a Very Large Crude Carrier (VLCC) tanker to an FPSO which measures 382 metres in length with the external turret and 58 metres in width. Armada Olombendo has a design life of 20 years and will be deployed to block 15/06 East Hub Field Development off Angola to fulfill its charter contract for the exploration and production company, Eni Angola.

Mr Michael Chia, Managing Director (Marine & Technology) of Keppel O&M, said: “The conversion of the VLCC tanker to FPSO Armada Olombendo is the 16th conversion project that Keppel has executed for Bumi Armada and we are glad to have built a strong win-win partnership with our long-standing client.

Keppel Shipyard’s work scope for the Armada Olombendo project includes refurbishment and life extension works, upgrading of living quarters to accommodate 100 personnel, fabrication and installation of an external turret mooring system as well as the fabrication, installation and integration of topside process modules. 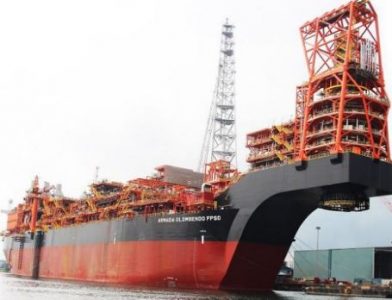