Maersk Drilling on Friday named one of the world’s largest jack-up rig, ‘Maersk Invincible’, at the DSME shipyard in Okpo, South Korea.

The rig is the last of Maersk Drilling’s four XL Enhanced (XLE), Ultra Harsh Environment jackups. Unlike the other three, which were built at Keppel FELS shipyard in Singapore, Maersk Invicible is being constructed at the DSME shipyard. According to Maersk Drilling the four jack-up rigs represent a total investment of $2.6 billion.

With a leg length of 206.8 m (678 ft), the XLEs are the world’s largest jack-up rigs and are designed for year round operation in the North Sea, in water depths up to 150 m (492 ft). They are capable of withstanding and operating reliably and safely in waves of up to almost 30 meters.

Upon delivery later this year, the rig will start a five-year drilling contract with BP providing plug and abandonment work on the Valhall field in the Norwegian North Sea. Maersk Drilling estimates the total value for the firm contract to be $812 million, including mobilization from South Korea to Norway. 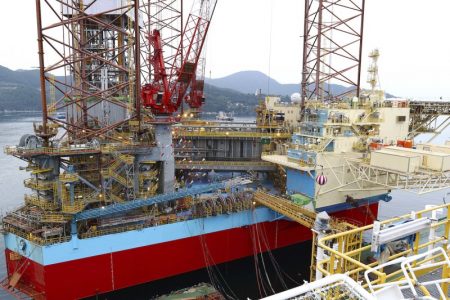