Statoil ASA has started production from its Gullfaks Rimfaksdalen natural gas and condensate development in the North Sea.

Development comprises a standard subsea template with two simple gas production wells and the potential for tie-in of two more wells. The well stream is connected to the existing pipeline leading to the Gullfaks A platform.

Gas and condensate are transported in existing pipelines to the processing plant at Karsto north of Stavanger. Gas is then exported to European markets.

The cost of development was $443 million compared with the $575 million originally estimated in the plan for development and operation (PDO) (OGJ Online, Dec. 16, 2014). Recoverable reserves from the project total 80 million boe, most of which is gas.

“The volumes from Gullfaks Rimfaksdalen help us reach our ambition of maintaining production and a high activity level on the [Norwegian Continental Shelf] beyond 2030,” said Arne Sigve Nylund, Statoil executive vice-president for development and production, Norway. “We have a well-developed infrastructure and we will keep realizing opportunities in the North Sea.” 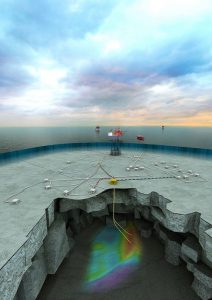