The Obama administration on Friday issued the first federal strategy for developing wind farms off the U.S. coast as part of the president’s agenda to combat climate change.

The National Offshore Wind Strategy aims to create 86 gigawatts of offshore wind energy by 2050, which is enormous given that the only offshore wind farm in the U.S., off the coast of Rhode Island, comprises 30 megawatts, or 0.03 gigawatts, enough electricity to power 17,000 homes in New England.

“This administration has made significant investments in clean energy technologies, supporting a diversified energy portfolio to help meet our Climate Action Plan goal of permitting 20,000 [megawatts] of renewable electricity generation on public lands and waters by 2020,” said Secretary of Interior Sally Jewell.

A trade group representing the offshore energy industry called the plan “a glass only half full of opportunity.” Randall Luthi, the president of the National Ocean Industries Association, said while the plan is a good start, “a more realistic offshore energy strategy would be broader, involving both non-traditional sources, such as offshore wind, and traditional sources, such as low-cost and efficient offshore oil and natural gas.”

Stay abreast of the latest developments from nation’s capital and beyond with curated News Alerts from the Washington Examiner news desk and delivered to your inbox.

“Unfortunately, the federal regulators are apparently saddled with blinders that provide only a narrow focus for our energy future,” Luthi said. He noted that Jewell reversed plans to open up the Atlantic coast for the first time to offshore oil and gas drilling. “Imagine how many additional jobs, increased economic development and greater energy security could be provided to U.S. consumers and residents all along the Atlantic coast if wind, oil and natural gas were included in the offshore energy development strategy announced today.”

Energy Secretary Ernest Moniz touted the “enormous progress” made on offshore wind. “The first offshore wind farm has now finished construction, and we have gone from zero offshore wind areas leased before this administration to 11 areas that total the size of Rhode Island.

“Today’s collaborative strategic plan is part of a long-term commitment to support innovation that enables widespread offshore wind deployment and shows how offshore wind will benefit our country with new jobs, less pollution, and a more diversified electricity mix,” he said.

Offshore wind in the U.S. has suffered a number of challenges, including wide-ranging opposition by citizens and others in states such as Massachusetts. The most famous case is Cape Wind offshore from Cape Cod, which was delayed by lawsuits for more than a decade. The U.S. ranks behind other developed countries in its development of offshore wind.

Friday’s plan acknowledges the challenges by offering 30 federal fixes the Energy and Interior departments can take over the next five years to fix them. 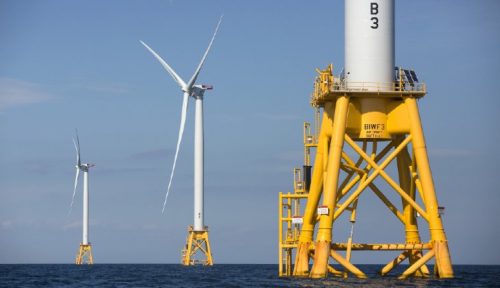