In the picturesque Cromarty Firth where dolphins can be seen leaping between blue-gray waves, giants of twisted metal sit waiting to be used or scrapped.

The price of crude oil is steadily declining, and in Scotland as in many other countries, this means the abandonment of oil rigs. To disassemble the machines is not just costly, it also might prove to be a mistake should the market rise again. So the massive rigs, weighing around a thousand tons each, are towed into the bay of Cromarty Firth from the North Sea. Here they will pile up and rust until the economy turns its favor toward crude oil again. Many Scots hope for this, particularly those in areas supported by the drilling industries.

These rusting rigs are a symbol of what many say is the end of Scotland’s oil industry, a looming harbinger of unemployment in communities that have depended on the oil industry for decades. But port authority CEO Bob Buskin doesn’t refer to Cromarty Firth as a graveyard but rather as a parking lot, indicating his belief that the situation will change. 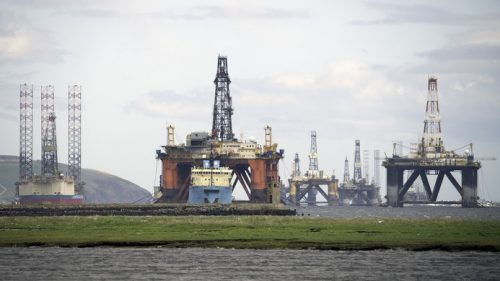