The world’s largest and most powerful wind turbine has been installed offshore at the Burbo Bank Extension project, setting a new milestone for the offshore wind industry.

The first V164-8.0 MW wind turbine has been installed at DONG Energy’s 258 MW Burbo Bank Extension project off the coast of Liverpool, UK. The turbine is the first of 32 to be installed at the site, which will set a new benchmark as the first offshore project to utilise the world’s most powerful wind turbine.

CEO of MHI Vestas Jens Tommerup said the installation was a huge milestone for the whole industry.

“The offshore installation of the first V164-8.0 MW turbine is a significant achievement for MHI Vestas and an important milestone for the offshore wind industry,” said Jens Tommerup, and continues: “MHI Vestas is committed to affordable offshore wind power, and as a turbine manufacturer we are delivering a larger and more powerful wind turbine- the V164-8.0 MW.”

“The introduction of the V164-8.0 MW will support the industry’s ambitions to drive down the cost of energy through reduced installation time, electrical infrastructure, foundations, and service visits compared to power plants using less powerful turbines.”

Claus Bøjle Møller, project director at DONG Energy, said: “The installation of this world-first technology is really paving the way for offshore wind energy. By using bigger turbines we are able to bring down the cost of providing clean, renewable energy to homes around the UK.”

The blades for the V164-8.0 MW turbines –which were designed, tested and manufactured at the MHI Vestas blade factory on the Isle of Wight- are the first locally built blades to be installed at a UK offshore wind power plant. The MHI Vestas factory on the Isle of Wight is where the unique skills and processes were developed that are necessary to produce blades on a large scale. 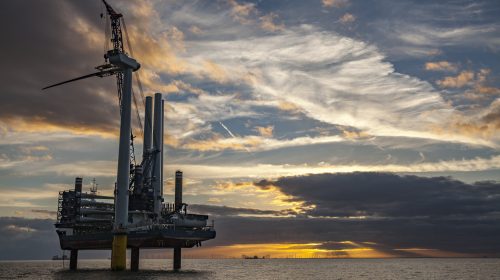