With this Siemens set sail for a new era in offshore wind energy. Part floating hotels, part floating warehouses: these vessels are fully equipped to spend up to one month at a time at their respective wind farms and feature an innovative hydraulic walk-to-work gangway system that allows technicians to safely access wind turbines in extreme weather conditions. Thanks to these factors maintaining offshore turbines will become considerably cheaper, safer, and help increase availability – this is the future of offshore wind energy.

The technology for producing electricity from offshore wind is more popular than ever before. Efficient and with capacities of several hundred megawatts, modern wind parks can almost achieve the same performance level of conventional power stations. However, the ever bigger wind parks installed ever further from the coast present service teams with new challenges in terms of maintaining the plants.

With the new offshore service ships, Siemens is revolutionising the maintenance and servicing of offshore wind parks. Thanks to the ships, which are equipped with cutting-edge technology, weather-related risks are considerably minimised. Another advantage is that the floating workshops can anchor offshore close to the wind parks for a longer period of time. This means that this latest generation of service ships for wind parks is safer, quicker and more reliable at sea than any of its predecessors.

The SOVs are also equipped with a highly modern, hydraulically stabilised bridge that provides service technicians safe access to wind turbines even in bad weather. This enables technicians to literally “go to work” – and in 2.50m high waves. With the conventional landing methods of the smaller crew transfer ships currently in use, maintenance staff are only guaranteed safe access to the wind turbines at wave heights of 1.50 m.

Following the ship launch on 23 June in Rostock and 25 June 2015 in Hamburg, the new SOVs were put to sea and started their work at the Baltic ll wind park in the Baltic Sea and at the Butendiek wind park in the North Sea. This is the start of an interesting time for the Siemens maintenance team as they will be undertaking real pioneering work as modern seamen. The teams can now work in weather conditions that they previously were not permitted to work in due to safety reasons. Unexpected changes in the weather will of course continue to make working at sea a challenge, but with the new SOVs, servicing will be much safer, more efficient and cheaper. 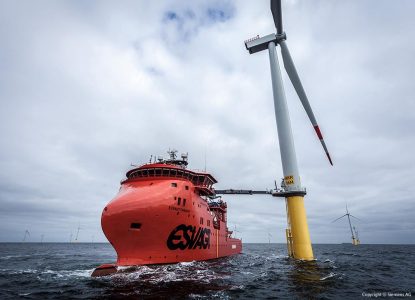