Based on the extensive experience in harsh environment and existing OCEAN designs, these units will add true value to the market in terms of safety, workability and efficiency.

The OCEAN850-HE and OCEAN1600-HE form the basis for respectively the mid water and deep water harsh environment regions of operations. The semi-submersible hull shape is especially designed for low motion characteristics and optimum station keeping capabilities.

The OCEAN1600-HE is the top of the range and the largest drilling semi design by GustoMSC to date. With a maximum displacement of approximately 70,000 tons, a large derrick, DP3 and a 16 point mooring system for station keeping, combined with a large deck area and large variable deck load, it aims at the high spec deep water spectrum. It is designed to cope with the North Atlantic environmental conditions. With the OCEAN850-HE a cost efficient midwater harsh environment design is provided. In the current market CAPEX needs to be controlled as well as the OPEX, to enable to work profitably at a reasonable day rate. It resulted in a moored-only harsh environment semi-submersible of approximately 50,000 tons displacement with a water depth rating of 1,000 meters and a 6th generation efficient single derrick combined with horizontal riser storage.

GustoMSC has been involved in the design and engineering of semi-submersibles since the 1970s. In the mid-1980s, Keppel Fels-DTG and GustoMSC teamed up to develop the DSS series of drilling semisubmersibles, including the Maersk D-rigs, the Gold Star and the Floatel DSS20-NS designs. This successful development is still continuing.

GustoMSC’s proprietary OCEAN series, started in 2008, has also become a success story with five units built and introduced within weight, budget and time. With the introduction of the OCEAN-HE series GustoMSC is able to provide full coverage of the harsh environment drilling spectrum. 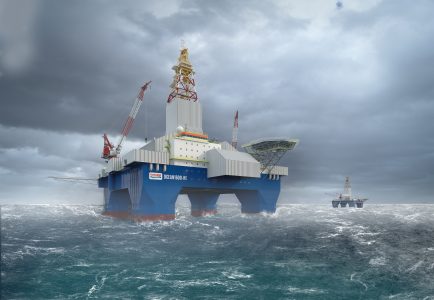 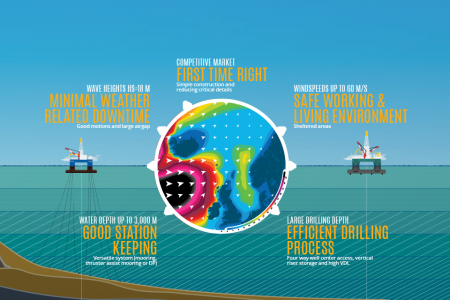