A salvage team has made it on board the grounded ‘Transocean Winner’ in Scotland as part of the ongoing salvage operation which officials say may now take weeks to complete.

A team of eight salvors climbed on board the rig Sunday afternoon to begin the full assessment of the drilling rig in preparation for its eventual refloating. Once on board began the team setting up camp for their extended stay on board the rig and established a supply line to transfer equipment and supplies. A second group of six were expected join the team on the rig on Monday.

The UK Maritime and Coastguard Agency reported Monday that two of the rig’s four diesel tanks are intact and plans are under way to transfer the contents – a total of 137 metric tonnes of diesel fuel – using onboard pumping systems to other tanks above the water line.

The rig was reported to be carrying 280 metric tonnes of diesel oil when it ran aground last Monday, August 8, on the west coast of the Isle of Lewis in Scotland. The Coastguard said previously that a maximum 53 tonnes of diesel could have been lost from the breached tanks, although according to the Coastguard there have been no reports pollution.

An exclusion zone of 300 meters remains in place around the rig, covering both the sea and the air, so authorities are reminding the public that the use of drones is not permitted.

An AugustaWestland AW139 helicopter along with a second aircraft are now based in Stornoway to support the ongoing operation. Crews are also carrying out a multi-beam survey to identify the safest route to move drilling rig when the time comes, but officials estimate that moving the rig still weeks away.

“Once the assessment is under way, we’ll have a much better idea of what we are dealing with, which will mean a more detailed salvage plan can be drawn up and put into place,” said Hugh Shaw, Secretary of State’s representative for maritime salvage and intervention. “We’ve made a commitment to keeping people informed locally and we intend to keep to that – once I’m happy that the plan is ready, we will be sharing it with community leaders and the community as a whole.”

The 17,000 ton Transocean Winner ran aground after breaking free from the ALP Forward in heavy weather during a tow from Norway to Malta. The 33-year-old rig had just completed a contract for Marathon Oil in the Norwegian sector of the North Sea in July, and was reportedly headed to Turkey to be demolished when the incident occurred. 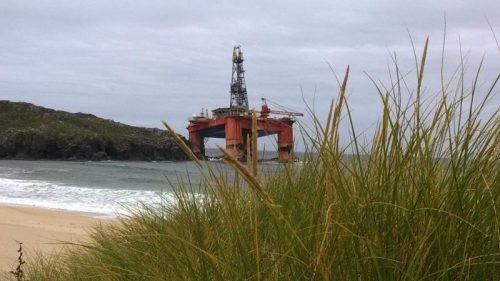