Norwegian oil major Statoil has informed that a substructure for the Aasta Hansteen spar platform, a first of its kind to be installed offshore Norway, has now reached its complete form.

The 70,000-ton spar platform for the Aasta Hansteen field located in the Norwegian Sea is being built at the Hyundai Heavy Industries’ facility in Ulsan, South Korea. HHI is building both the lower hull and the topsides.

Statoil said on Saturday that the substructure reached its complete form and it now weighs 45,000 tons, it is 200 meters long and 50 meters in diameter.

The Norwegian company earlier said that on July 27, 2016, the 4,500 ton spar deck was lifted onto the substructure at Ulsan.

Hull and topside will arrive at Stord in Norway next year before the entire structure is completed and towed to its final destination in the Norwegian Sea.

Aasta Hansteen will be developed using a floating integrated spar platform and two subsea templates with a total of eight well slots.

While initially scheduled to start in the third quarter of 2017, the production from the field was postponed in October 2015, due to delays in construction of the platform, with first gas now expected in 2018.

Statoil is the operator of the Aasta Hansteen field with 75 percent interest, while other two licensees are OMV and ConocoPhillips with 15 and 10 percent, respectively. 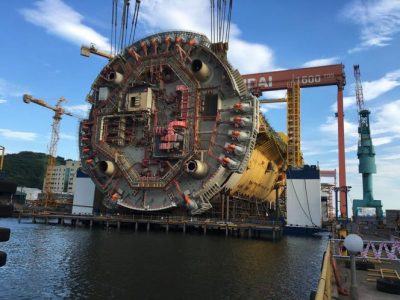