With the quite limited number of kilometres on the Belgian coast line, transmission system operator Elia was thinking about doing something different, more efficient and cost effective than just bringing a cable to shore for every new wind farm.

At the moment there are already four offshore wind farms in Belgian waters and the number is foreseen to increase to nine in its final configuration.

In an international competition, KCI was awarded the Concept Verification and Basic Design of a so-called Offshore Switch Yard (OSY).

An Offshore Switch Yard (OSY) could be seen as a central offshore power socket and is a completely new concept. It will combine the generation power from several Offshore Wind farms and bring it combined to shore. Until now, all North Sea wind farms have been connected individually to onshore grids. But that is about to change with Elia’s plan for a modular grid to which wind farms could be connected and which will bring the power to shore through one single OSY. Creating a modular grid is ideal from a technical, economic but also environmental viewpoint as it will facilitate shared use of the grid by many wind farms. Moreover, the idea for a modular offshore grid, does not limit itself to Belgian waters. Elia and its partners want to be at the basis of laying a direct current offshore grid in Europe.

KCI has just finished the Basic Design of the OSY, which is actually the first design of its kind worldwide.

The outside of the OSY will look like a substation of which KCI has already designed many. The inside however is quite different. No transformer is needed inside the platform as the voltage of the offshore wind turbines has already been changed in the substations from medium to high voltage.

The platform will house 220kV gas insulated switch gear and multiple submarine cable connections. Whereas a substation often has an export cable of around diameter 100-150mm, the cable of the OSY will be much thicker. 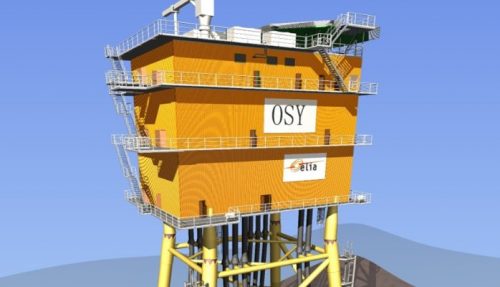