ALE has completed the load-out of the first 30,000t Cat-J jack-up rig at the Samsung Heavy Industries Shipyard in South Korea by using its skidding system designed specifically for the project.

The 30,000t Cat-J jack-up rig was built on top of supports on a concrete track some 20 meters from the quayside.

The load-out was done earlier this month using the company’s self-propelled skidding system to load-out the rig from the quay onto a floating drydock barge. The 76 skid shoes installed under the rig were equipped with a 650t jack each and by extending the cylinders, the load was transferred from the supports to the skidding system.

According to the company, the three-point hydraulic suspension was created in order to control and check the stability of the system during the load-out and the ALE ballast system was installed beside the internal ballast system of the floating drydock itself.

ALE’s Supervisor, Nico den Engelsen, said: “Speaking on behalf of the team, I can say that we are incredibly proud of the system and how it represents the next level of skidding capabilities.”

The CAT-J project involves the creation and delivery of tailor-made rigs for us both surface and subsea wells in the shallow-water segments on the Norwegian continental shelf. 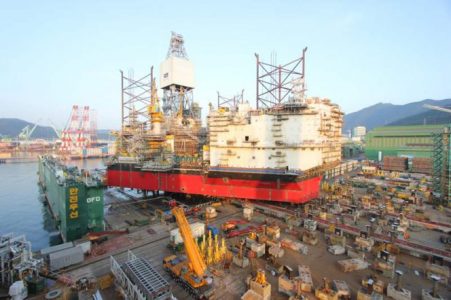