ExxonMobil Exploration & Production Norway has received approval from the Norwegian Petroleum Directorate to start up a subsea facility for production well E-29 AH at Balder oil field on Block 25/11 in the central North Sea.

The well, about 3,500 m from the Balder floating production unit (FPU), is the seventh to have received consent in the field since 2013. Balder is developed with a combined drilling and wellhead facility.

Balder and Ringhorne produce primarily by natural aquifer drive, but reinjection of produced water is used for pressure support, especially into the Ringhorne Jurassic reservoir. Excess water is injected into the Utsira formation. Gas is also reinjected if the gas export system is down.

Balder and Ringhorne contain several separate oil deposits in Eocene, Paleocene, and Jurassic sandstones in 1,700 m-deep reservoirs. ExxonMobil acquired 4D seismic in 2006, 2009, and 2012 to be used as a basis for reservoir monitoring and evaluating of new drilling targets.

Oil from the field is transported by tanker. Excess gas from Balder and Ringhorne is exported to the Statpipe via the Jotun A production vessel.

ExxonMobil is operator and sole licensee on production license 001. Balder field lies in 125 m of water about 190 km west of Stavanger. Its plan for development and operation was approved in 1996 and production started in 1999. 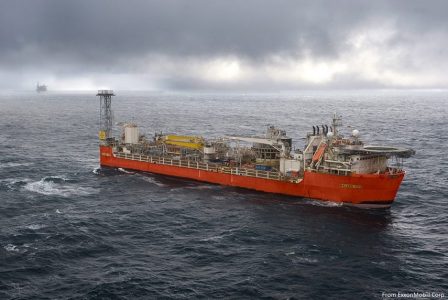