Mobilisation included welding of large steel structures on deck to elevate and support the nacelles for the planned transatlantic voyage.

Brave Tern is now en route to St. Nazaire, France, where the five GE Renewable Energy’s Haliade 150-6MW nacelles will be waiting to load onto the vessel. After load-out the vessel will transit across the Atlantic to install the turbines at Block Island wind farm before returning to Europe. The turbine installation is scheduled to start by the begining of August.

Brave Tern has also been fitted with the ZephIR Lidar 300 to complement the onboard technology with delivery of real-time wind information.

Deepwater Wind’s Block Island is around 3 miles south-east of Block Island, Rhode Island, and is expected to be commissioned by the end of 2016. 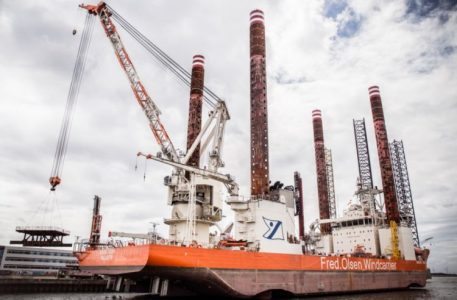