Siemens has awarded a four-year Crane Framework Agreement to heavy-lift specialist ALE for the supply and deployment of cranes, specialised transport equipment and personnel.

With over 30 branches, and UK bases in Teeside and Staffordshire, ALE is one of the world’s biggest heavy transportation and lifting contractors. The contract is for the period 2016-19, and has a value in excess of £43m (55m Euros). It covers Siemens’ harbour-based offshore wind sites in the UK and Germany, and fulfils the requirements of Siemens’ offshore logistics concept, presented in 2015. Approximately three quarters of the contract value relates to UK offshore projects, all of which will involve blade export or pre-assembly at Siemens’ new facilities in Hull. The work involves onshore heavy lifting, transport and pre-assembly for offshore wind operations. The contract is effective from the beginning of June 2016.

Clark MacFarlane, Managing Director, Wind Power Division at Siemens plc., said: “Given the high proportion of the work covered by this contract that will take place in the UK, we are delighted to be able to appoint a British supplier with an international reputation in this field. This contract is a great step for our development in Hull and the offshore industry in the UK which is committed to growing the content of offshore wind farms that is made in the UK.” With its partner, Associated British Ports, Siemens is investing £310m in the development. The Siemens facilities will create 1,000 direct jobs and many more during the construction phase and in the supply chain.

The first offshore wind power plant to benefit from the newly-constructed Hull harbour, Alexandra Dock, will be the Dudgeon project off the Norfolk coast. Dudgeon, is owned by Norwegian energy companies Statoil and Statkraft and Abu Dhabi’s renewable energy company, Masdar. It will be operated by Statoil. The Dudgeon wind farm will comprise 67 of Siemens’ 6 MW offshore wind turbines. With an overall capacity of 402 MW Dudgeon will provide clean power to more than 410,000 UK households. ALE equipment and staff will be used in the handling and pre-assembly of imported towers, nacelles and blades to be used on the Dudgeon offshore wind park. Where possible, a “Roll-on/Roll-off” process is used, instead of lifting. This method provides more safety and cost efficiency when it comes to moving up-to-75-metre-long rotor blades, and nacelles weighing around 360 metric tons.

It is now less than five months until the first wind turbine blades are manufactured by Siemens in Hull. The first workers who will be taking up the new posts there have started their training. The production of the first blades is scheduled for winter 2016. The grand opening will take place in 2017. Siemens is a significant UK employer with 14,000 employees, including around 2,000 employees in its renewable businesses. 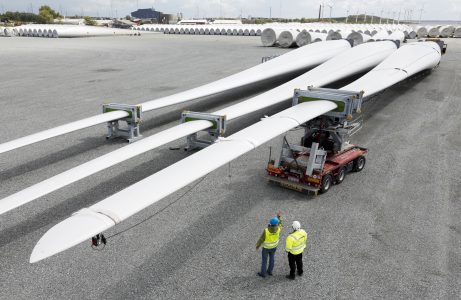