In its May Oil Market Report, the International Energy Agency states that the global oil market is ‘staying on course’ to be balanced.

“Changes to the data in this month’s OMR confirm the direction of travel of the oil market towards balance. The net result of our changes to demand and supply data is that we expect to see global oil stocks increase by 1.3 million b/d in the first half of 2016 followed by a dramatic reduction in the second half of 2016 to 200,000 b/d,” IEA said.

IEA’s outlook for global oil demand growth in 2016 has remained unchanged at a solid 1.2 million b/d for 7 consecutive monthly reports. The world, therefore, is expected to consume 95.9 million b/d of oil products this year.

However, a faster demand growth of 1.4 million b/d was recently recorded for this year’s first quarter in spite of the northern hemisphere’s winter being milder than usual.

“Any changes to our current 2016 global demand outlook are now more likely to be upwards than downwards, as gasoline demand grows strongly in nearly every key market, more than offsetting weakness in middle distillates. Slower demand growth in OECD countries is not unexpected; it represents a return to the norm,” IEA said. 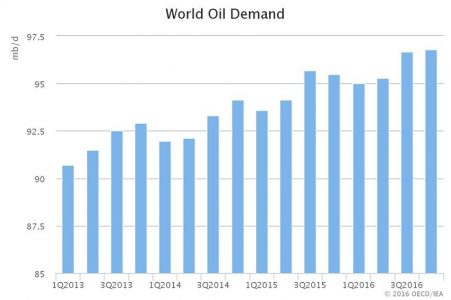 Led by transport fuels, India’s oil demand in the first quarter was 400,000 b/d higher year-over-year, representing nearly 30% of the global increase. “This provides further support for the argument that India is taking over from China as the main growth market for oil,” IEA said.

Following India in terms of oil demand growth were China and Russia, respectively, higher by 355,000 b/d and 275,000 b/d in this year’s first quarter. Having slowed dramatically towards yearend 2015, the latest US data show renewed strength.

The global macroeconomic environment is still relatively benign. However, in April, the International Monetary Fund’s expectations for global GDP growth was revised down to 3.2% from 3.4% for 2016 and to 3.5% from 3.6% for 2017, suggesting some economic headwinds. 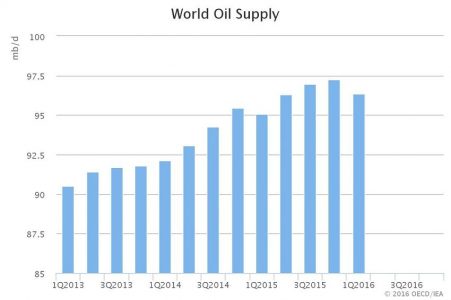 Compared with gains of more than 3.5 million b/d just a year ago, world oil production grew by a meager 50,000 b/d in April.

OPEC crude output rose by 330,000 b/d in April to 32.76 million b/d—the highest since August 2008—as a 300,000 b/d jump in Iranian flows and higher Iraqi and UAE supplies more than offset outages in Kuwait and Nigeria. Saudi Arabia held production steady.

“In the weeks ahead of the [June 2] Vienna meeting, OPEC production may rise higher still with Saudi Arabia likely to lift output to cover higher domestic requirements for summer power generation and Kuwaiti output fully recovered from a 3-day workers’ strike. Iran and Iraq may also post further gains although their potential for substantial increases may be limited due to near-term production capacity constraints,” IEA said. 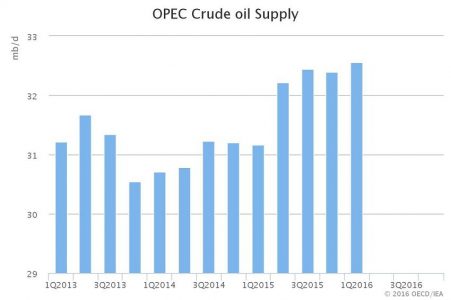 The ability of Venezuela’s oil industry to maintain operations is at risk in the face of power cuts and other shortages.

Non-OPEC oil production continued to fall in April as a number of outages added to declines caused by lower prices and spending curbs. Output in April is estimated to have dropped by another 125,000 b/d from March, to 56.6 million b/d, or more than 800,000 b/d below a year ago, with month-over-month declines stemming primarily from Canada, Russia, Ghana, Italy, and the US.

Output is forecast to drop more sharply in May, after a devastating wildfire blazed across the heartland of Alberta’s oil sands region and shut in more than 1.2 million b/d of production in early May, IEA said.

US production continues to fall. In February, the latest month for which a complete set of supply data are available, crude and condensate output fell 50,000 b/d from a month earlier to 9.13 million b/d. The steepest declines stemmed from onshore Texas, which fell by 40,000 b/d month-over-month, and offshore Gulf of Mexico, down 34,000 b/d from the prior month. In contrast, output in North Dakota and New Mexico inched up by 7,000 b/d and 26,000 b/d respectively.

OECD stocks, the report said, grew in the first quarter at the slowest pace since fourth-quarter 2014 and in February they declined for the first time in a year. In March commercial inventories from the Organization for Economic Cooperation and Development fell by a narrow 1.1 million bbl to stand at 3,044 million bbl by the end of the month, with April preliminary data suggesting that stocks rebounded while oil held in floating storage rose.