The vessel will be built by Sembcorp Marine at its flagship Tuas Boulevard Yard in Singapore.

Heerema’s Sleipnir is one of just a handful of large offshore projects currently running, along with the Johan Sverdrup Field Centre in Norway, where Harding is also a supplier. “Everyone is talking about Sverdrup, but this project is every bit as big, with just as many systems,” says Harding’s regional sales manager Oddgeir Mælen.

And while deliveries are essentially based on offshore technology, the Heerema contracts pose a special kind of challenge. “The new crane vessel will serve world-wide, so a number of relevant international standards had to be considered when selecting life saving equipment,” Mælen relates.

The FF1200 is a 70-person freefall lifeboat designed to DNV OS E-406 standards, the most stringent in the industry, far exceeding SOLAS rules for freefall lifeboats. The boats will be perfectly matched with their LA1200H and LA1200HO skid launch davits, specially designed for the FF1200.

The Sleipnir contract will push Harding just over the 100 mark on delivered FF1200 lifeboats, securing its place as an industry favourite. Speaking to Offshore Visie Oddgeir Mælen says he believes it is no coincidence that Harding was selected to supply this latest Heerema project. “Harding lifeboats are the industry leaders, the boats chosen for the most demanding projects and benchmark vessels,” he points out.

For example, Harding supplied lifeboats to all the ships nominated for major Nordic shipping magazine Skipsrevyen’s “Ship of the Year” award for 2015, including the winner, the Skandi Africa. “Delivering to Heerema’s NSCV is yet another confirmation of the quality of our products and service,” Mælen states.

Winning contracts in today’s trying times requires more than just good fortune, and Harding finds itself sitting on some of the biggest. What’s the secret?

“Superior systems are the key to winning contracts, and we believe Harding quality is at the base of this success. But we also put in a lot of hours with both the yard and the owner right from the start on the Heerema project,” Mælen tells. “We listened to their concerns and came back with the best answers,” he explains, adding that Harding’s ability to draw on good local contacts, a strong global network and technical prowess was a determining factor.

“Harding has truly used its global outreach on this project. In order to put together the best possible bid, we enlisted a high degree of participation from our offices in the Netherlands, in Singapore and in Norway,” says Mælen. “Access to this overall expertise allowed us to provide the most value for the money. I believe it speaks of our ability to deliver quality at competitive prices.”

Harding CEO Styrk Bekkenes agrees: “We are extremely proud of winning such a competitive contract in today’s tight market. Harding has been through a major transition to reach our current level of capability, and in this bid we could really see the benefits. Our people pulled together and stepped up to a new level.”

With the Sleipnir contract, Harding has proven that it is not just a player, but a stayer in offshore, matching Heerema’s own forward-leaning stance. By pressing ahead with the Sleipnir project despite the low price of oil, Heerema has proven its commitment to serving the industry, and Harding stands equally as firm: “We are not in and out,” Bekkenes emphasises. “Harding is in to stay.” 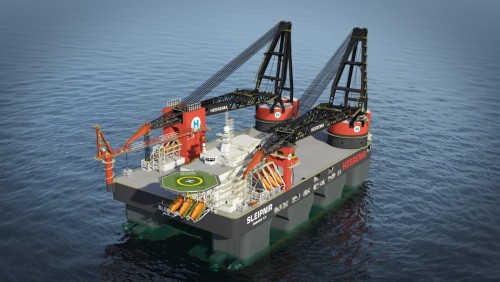