The vessel will be built at the Sembcorp Marine Tuas Boulevard Yard in Singapore.

Upon signing the contract for the NSCV build, Sembcorp Marine said that, when completed, the vessel would be the largest of its type, and the third largest vessel overall, in the world. The new vessel will be equipped with two cranes of 10,000 tonnes lifting capacity.

The contract with Wärtsilä, the Finnish engine and power systems manufacturer, was placed in October.

Sipke Schuurmans, project director of Heerema Offshore Services, said: “We have a long-standing relationship with Wärtsilä propulsion solutions on other vessels in our fleet and look forward to successfully continuing this relationship. We have every confidence that these state-of-the-art thrusters are the right choice for this vessel, which is destined for offshore projects worldwide.”

According to Wärtsilä, eight 5500kW underwater mountable thrusters will be responsible for the accurate positioning of the vessel. Four of the eight thrusters will also be retractable, the company added. Wärtsilä has developed these four forward retractable thrusters specifically for this project, and given them the type indication WST-65RU.

The company said that, in addition to the thrusters, the full scope of supply would include auxiliaries for steering and lubrication, the control units, and Wärtsilä’s Propulsion Condition Monitoring Service (PCMS). Wärtsilä will also supply centrifugal pump packages.

According to the company, delivery of the equipment will begin at the end of 2016. 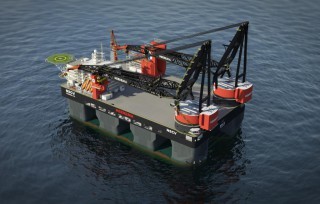