Van Oord’s flexible fallpipe vessel Stornes has recently been in Damen Shiprepair & Conversion Rotterdam for a scope of work which allows the vessel to operate at greater water depths in future.

Stornes is a 175m long, 26.24m wide, DP2 vessel used for subsea rock installation to protect piping. Since her delivery to Van Oord in 2011, Stornes has mostly been installing rocks to water depths up to 800 metres. However, a contract awarded to the company in 2013 required the vessel to operate at 1,300 metres. After some minor modifications in 2014, the first phase of the contract was executed. Now, the vessel has received an upgrade to her rock-dumping tower, which enables an even better performance at these water depths. For this, Van Oord chose Damen, as Damen Shiprepair & Conversion Sales Manager Paul Ippel explains: “We have been welcoming vessels from Van Oord for some years now and we received an invitation to tender for the Stornes project in 2014.”

Ippel says the long-standing relationship between the two companies is based on close cooperation. “From the outset of the project, cooperation between ourselves and the tender desk, superintendents and project managers of Van Oord has been excellent. This has meant that both partners maintained a continual understanding of what was happening and ensured the success of the project.”

During installation a lot of challenges arose
Damen Shiprepair Rotterdam Project Manager Kris Kasper offers an example of the relationship in action: “Van Oord’s project team had been busy for two years preparing for this installation. The designers were on the ground at all times throughout, constantly on-hand to answer any questions from our side. It was a very fruitful relationship. Equally, the hard work of the subcontractors we worked with, such as ESS, ZUSO and Den Breejen, ensured that we were able to remain on track.”
Because of this tight coordination of activities, the project has been carried out according to schedule, with the vessel arriving on 6th march and departing 25th may 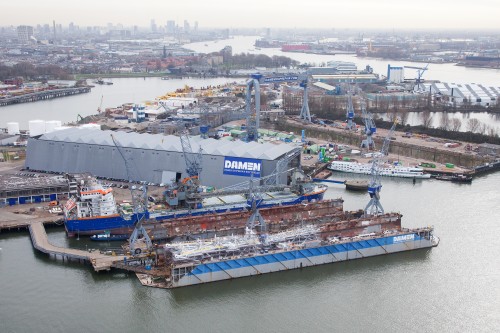