Statoil and its partners have made a gas discovery in the Snefrid Nord prospect in the Norwegian sector of the North Sea.

Drilled by the Transocean Spitsbergen semisubmersible, the discovery well 6706/12-2 proved a 105-m (344-ft) gas column in the Nise formation in PL218. Statoil estimates the volumes in the gas accumulation to be in the range of 31-57 MMboe. Snefrid Nord will be further evaluated for future tie-in to the Aasta Hansteen infrastructure.

Statoil plans to drill two exploration wells in the vicinity of Aasta Hansteen this year with the aim of proving upside potential in the area. After completing the well, the semisub will move to the neighboring license PL602 and drill an exploratory well in the Roald Rygg prospect. 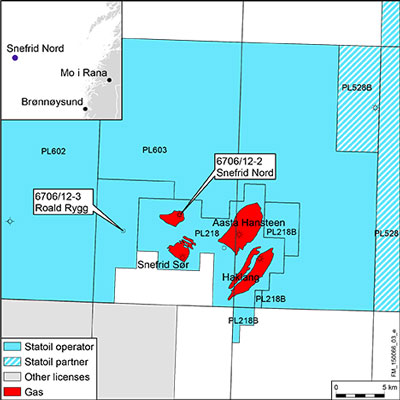