The FCS 2610, being constructed at Damen Shipyards Singapore, will be the first Damen vessel in Opus Marine’s fleet. Following delivery, the FCS 2610, which Opus Marine is going to name Verdi, will provide crew transfer services to and from offshore wind farms.

Managing Director of Opus Marine Bernhard Messer stated that the reputation of the FCS 2610 was instrumental in the company’s choice of vessel: “It is very well known on the market for its excellent performance. Furthermore, Damen is able to build the vessel in accordance with German regulations – which is important as she will be sailing under German flag in the North and Baltic Seas.”

The contract for the order was signed on 24 February. The vessel will be delivered in week 25 – representing a fast project execution of just 16 weeks. 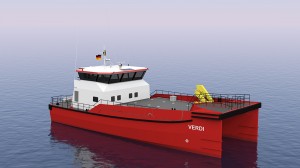