On 21 February Statoil and its partners started up production from Oseberg Delta 2 in the North Sea.

The field’s recoverable reserves are estimated at 77 million barrels oil equivalent. Oseberg Delta 2 is the tenth project in Statoil’s fast-track portfolio to be completed. The field, which is tied back to the Oseberg Field Centre, has been developed using two subsea templates with capacity for a total of eight wells. The initial phase of the plan initially involves three oil producers and two gas injectors.

“Delta 2 is an important element in extending the lifetime of Oseberg. It pr​ovides a good example of how we can make lesser discoveries profitable by using existing infrastructure while it is still available,” says Arild Dybvig, vice president for fast-track development projects in Development & Production Norway. The start-up of the first well is in line with the development plan and takes place 38 months after the discovery became part of the fast-track portfolio.

The total investment is slightly less than NOK 7 billion, well below the estimated investment cost when the project was sanctioned. “We’ve delivered yet another high quality, fast-track development according to plan and well within budget,” says Torger Rød, senior vice president for subsea projects in Technology, Projects & Drilling. Oseberg Delta 2 marks a further development on the Delta terrace where oil from two wells on an existing template has been produced since 2008.

“The new development includes gas injection that will give us a substantially greater recovery rate. There are also some good opportunities for the further development of the area and an exploration well has already been planned in the southern part of the Delta terrace,” says Terje Gunnar Hauge, vice president for operations on Oseberg East. The plan for development and operation was submitted to the Ministry of Petroleum and Energy on 30 May 2013.​​​​​​​​ 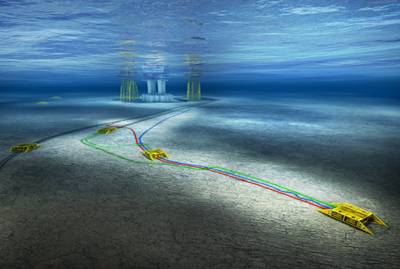