Alewijnse Marine Systems has been awarded the contract for the full electrical refit of the 114 metre diving support vessel Seawell, owned by Helix Energy Solutions Group. The Seawell is currently in the North Sea and is expected at the Damen Shiprepair Yard in Vlissingen at mid December 2014 for a planned long term life extension. Alewijnse will spend four months on site, with the work due to start next month. 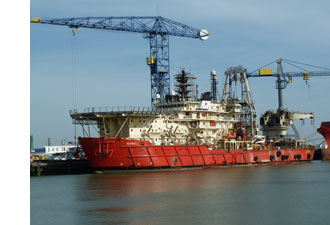 The 114m vessel first entered service in 1987 and is widely credited with pioneering subsea light well intervention in the North Sea. She also operates as a saturation diving vessel.   Alewijnse and Damen Shiprepair Vlissingen (part of Damen Shiprepair & Conversion)  have enjoyed a close working relationship for a number of years, and this latest contract is the most recent in a series of successful projects undertaken together.

The Seawell is one of the largest, single ship contracts that Alewijnse has undertaken and the full electrical refit is a highly complex and sophisticated project. The main element is the delivery of a full turnkey package for the installation of the electrical power and distribution. This includes an upgrade of the vessel management system, the decommissioning, installation and renewal of other important systems such as the derrick, main genset, power management system and several switchboards including the 6kV and 440V switchboards. Alewijnse is also supplying steelwork for the mountings of various items of electrical equipment and for cable supports.

“We are very proud to have been awarded the contract for the refit of the electrical power and distribution systems on board the Seawell. The contract is an acknowledgement of Alewijnse’s capabilities as a high-quality E&I EPCIC contractor in the offshore industry,” added Alewijnse Marine Rotterdam Managing Director, Ben Bonte. “It also forms an extension of the success of Alewijnse’s recent contracts with other major players in the offshore and shipping markets.”